Most prospective buyers rely heavily on online product reviews because these reviews help them ascertain which product or brand to buy. Most reviews, especially consumers’ reviews show not only the benefits of a product but also its drawbacks. The Char-griller Akorn Jr review, for example, discusses the product’s benefits including its cons, and thus, by reading such a review, consumers can surely find the best charcoal grill on the market today.

The Akorn Jr is a grill-smoker based on the traditional Japanese kamado cooker.  The original kamado cooker is a round pot with a domed lid that is made from clay or ceramics. Due to its design and materials, the kamado can efficiently create and retain heat.

The kamado design, was a Japanese design, that was borrowed by many manufacturers to create their own kamado grills and smokers. The Japanese use this cooker to cook rice on ceremonial occasions; but they also use it for smoking, grilling, roasting, and even baking. 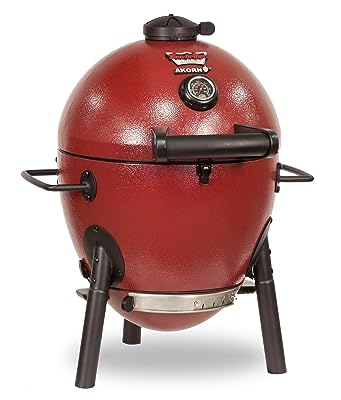 Char-Griller has largely borrowed from the traditional kamado design. It was able to produce a range of grills and smokers that are available on the market today. Based in Atlanta, Georgia, Char-Griller markets various grill designs including the Akorn Jr. Kamado Grill.

This Char-Griller product is a light and portable grill/smoker/barbeque that is great for picnics, tailgating, camping, and other outdoor activities. This kamado “Kooker” measures 20 inches (508 millimeters) in length and width and stands 25 inches (635 millimeters) high. It is made of triple-walled 22-gauge steel construction with a porcelain-coated interior finish designed to handle temperatures that range between 200-700℉ or 93.3-371℃.

The Char-griller’s construction method eliminates the need for heavy ceramic plates, and thus, the assembled Char-griller just weighs 40 pounds or 18.14 kilograms. It is light enough to be handled by one person.

Aside from being lightweighht and portable, the Akorn Jr. also uses porcelain coating instead of ceramics. It also uses charcoal for fuel and even with a limited amount of charcoal, the Akorn Jr can produce and retain the heat it needs for cooking.

The kamado cooker’s exterior is finished with a powdery coating that ensures protection against harsh external elements. Its porcelain coating likewise protects the insides from the heat that the cooker generates. The hinge design ensures that the lid stays vertical and will not swing further.

Upon unboxing, you can easily layout every part of it and assemble its contraption. The packaging of the bolts is well-thought and grouped accordingly. You can also assemble it out-of-the-box within 20 minutes or less.

Akorn Jr is equipped with two adjustable dampers, one on top and one at the bottom. These dampers maintain the airflow and provide temperature control inside the cooker. On the other hand, the triple-walled interior helps retain the heat in a similar manner as the ceramic does.

The combination of the triple-walled and porcelain-coated cooker interior is essential in controlling the temperature needed to cook different kinds of dishes. Additionally, it features a thermometer (in Fahrenheit) for monitoring its temperature.

The Akorn Jr. is multi-functional. It is often referred to as a grill and smoker at the same time. But you can do more with Akorn Jr. By using its heat control features, the kamado cooker can be used for roasting and searing meat. Moreover, with the addition of a pizza stone, it can be used for cooking pizza.

The Akorn Jr was designed with easy-to-remove ash pan at its bottom. This ash pan is held in place by an internal hook assembly where the circular pan support slides in and is secured by two latches. There is also easy access on the top grill where you can replenish the charcoal and it also has a top grill that can be lifted using a special tool.

The Akorn Jr. uses charcoal for its fuel and a handful or two of this charcoal chunks can smoke, grill or sear more meat than if you are using a different kind of grill with the same amount of charcoal. Moreover, the Akorn Jr. is considerably cheaper than that of the ceramic kamado cooker of similar size.

In this Char-griller Akorn Jr review, we categorically state that this little kamado smoker/grill is especially beneficial for use in small family and small gatherings. This is because it is small enough for use by a few people. Moreover, using the abovementioned parameters, we are also able to pinpoint the pros and cons of this grill model.

The Char-griller Akorn Jr. has removable ash pan that makes for easy cleaning of ash and it doubles as a smoker. The handles and stand, however, look a bit flimsy. Nevertheless, this grill has a succinct advantage: it is affordable which makes this grill the best charcoal grill option for those who are on tight budget.

I have a keen interest in helping people find that product that works them and make your buying decision more straightforward and less complicated. This is what I do most of the time if I'm not bowling with friends.

NationalRestaurantNY is reader-supported. When you buy through links on our site, we may earn an affiliate commission. Learn more

www.nationalrestaurantny.com is a participant in the Amazon Services LLC Associates Program, an affiliate advertising program designed to provide a means for sites to earn advertising fees by advertising and linking to amazon.com